ECOMUSEUM OF THE CHESTNUT AND TRANSHUMANCE IN RAGGIOLO

ECOMUSEUM OF THE CHESTNUT AND TRANSHUMANCE

ECOMUSEUM OF THE CHESTNUT AND TRANSHUMANCE IN RAGGIOLO

ECOMUSEUM OF THE CHESTNUT AND TRANSHUMANCE

To discover the environment of the "chestnut culture". Images, videos, antique tools, real life stories and historical photos enrich the exhibition space. This gives a very clear picture of Raggiolo and the surrounding area with its unique historical and architectural story, so your visit to one of the many excellent places to see in Casentino will be an informed and aware one. Hidden in the heart of the  Pratomagno mountain range, Raggiolo was an small but important center in the chestnut economy. In the silence of a place where time seems to have stopped, surrounded by great forests, Raggiolo has deep roots and an ancient legacy of pride, of the daily struggle with the harshness of life and of an ancestry that goes back centuries in time. It has stories of Lombards, of feudal lords and their weapon foundries and in particular of a colony of Còrsi (Corsicans) who settled here centuries ago to repopulate the ancient castle destroyed in the 15th century. The inhabitants of Raggiolo talk about their traditions with great pride. At one time they were mountaineers whose life was closely linked to the forest - an immense chestnut forest kept as if it were a garden - and by the transhumance of animals to Maremma. All this is now in the past but memories continue to be evoked. This fact is well illustrated by the Map of the Community of Raggiolo exhibited in the Ecomuseum. The Map was one of the first published in Italy and is a visual synthesis of the area as its inhabitants see it, where administrative boundaries and the logic of bureaucracy are unimportant: where stories and traditions, legends, as well as emergent culture and art, converge. The Map is an identity photo of Raggiolo and has been a constant reference point for the fruitful valorization work done over the years by the Ecomuseum in Casentino and the Raggiolo Brigade. Today visiting Raggiolo allows you to avoid mass tourism to see a place that’s off the beaten track, surrounded by the grandeur of age-old and boundless forests. A visit to the Ecomuseum of the Chestnut will open up a treasure chest of understanding and perception. Indeed, Raggiolo still offers today the vision that fascinated the English writer, Ella Noyes over a century ago, to which she dedicated a chapter of her famous guide to Casentino, published in London in 1905, and which the photographers Alinari have immortalized in a famous photo taken in the same time period. Steep, narrow cobblestoned streets, bridges over rushing streams and springs, mills and wash houses, a few remaining ‘seccatoio’ for drying chestnuts, the old church with its art treasures and the small square. Healthy silence brings peacefulness to the waterfall downstream of houses and gardens overlooking expansive views against the backdrop of the imposing profile of the Verna mountain. Shaped by the rhythm of ancient crafts, Raggiolo has a feeling of remoteness that is rare to find but that the Ecomuseum of the Chestnut’s tour itinerary illustrates very well with explanatory texts and historical photos. Unhurriedness, quietness, nostalgia and beauty are the distinctive features of Raggiolo, which the spirit of the place feeds with arcane magic.

The Ecomuseum of the Chestnut in Raggiolo was set up to recount the close link between the local population and their natural environment. In fact, thanks to the intervention of man, the chestnut tree has become a domestic plant par excellence and an indispensable food resource for the people of Casentino. In this environmental context, the locals have always valued a particular species known as "Raggiolana", named for its place of origin and distinguished for the abundance of its fruit, which once dried and ground into flour, can be stored for a long time.
The cultivation of chestnut trees has characterised lifestyle, customs and traditions in Raggiolo for centuries and has become part of its identity. The Ecomuseum proposes itself as an active custodian of the ancient skills of this mountain people, preserving and presenting the collective memory of a community defined by its geographic environment.
The Ecomuseum of Raggiolo is divided into a series of spaces and buildings spread out over the area:
The Interpretation Center
This is the reference point of the entire Museum. Through displays of work tools, models, panels and audiovisual material, it is possible to trace an itinerary around the "chestnut culture" and acquire informational material to guide you on the route. The space hosts another precious fragment of the village’s identity: the Raggiolo Community Map created with the direct contribution of the inhabitants. In recent years, a new section dedicated to transhumance has been added, another central theme in the history of the village and the meadows of Pratomagno that overlook Raggiolo, where in the past hundreds of sheep grazed during the summer season before undertaking the long journey to Maremma in the autumn.
The Còrsi Room
Housed in the same building, this is the where social and cultural activities of the village take place.
The Wall of Forgotten Words
Words from the past, linked to the history of Raggiolo and its ancient crafts, have been carved in stone so as not to be forgotten. They make a fine display on the wall next to the old fountain in the square.
The Stone village
From the Interpretation Center, the itinerary continues through a series of stopping points (the Wall of Forgotten Words, the Room of Time, the sculpted rocks at the Ponte della Piana), the result of upgrading interventions carried out over the years by the Ecomuseum thanks to the collaboration with the association "La Brigata di Raggiolo". On this picturesque itinerary specific display panels give visitors some insights on local history and stories, with informative texts and historical photos of the village, its local characters and the Corsican colony who resettled here in the sixteenth century. The route along the cobbled streets offers picturesque glimpses of aspects of this characteristic village and beautiful views of the forest and the valley’s horizon, against the backdrop of the Verna mountain.
In the village there is a restaurant, an ‘Albergo (hotel) diffuso’, some B&B’s and a holiday home, as well as a recreational club.
Seccatoio dei Cavallari (Chestnut drying house)
Located at the exit of the village towards the Barbozzaia river and still used today to demonstrate the process of drying chestnuts and in autumn as a venue for storytelling events called "vigils in the drying house".
Mill of Morino
The old factory, part of a restoration project, is a precious testimony of local material culture. Inside the mill some panels illustrate its history and operation.
From the Mill, the "Chestnut Trail" continues along the river upstream towards the village on the "Sentiero (path) della Mercatella".

Raggiolo is a "world apart": hidden in the heart of the forest between two impetuous rivers, it was founded by the Lombards before the year 1000 and later became the fortified castle of the Guidi Counts, who set up some sidearm forges here. Count Federico Novello di Raggiolo is mentioned by Dante in the VI Canto of Purgatory. The nucleus of the village is concentrated around the ancient castle, which reached the height of its splendor with Guido Novello II at the beginning of the fourteenth century. The present day inhabitants of Raggiolo are the descendants of the colony of Còrsi (Corsicans), who settled here centuries ago repopulating the ancient castle destroyed in the 15th century. They came to Raggiolo at the end of the fifteenth century with transhumant herds returning from Maremma. The Corsican influence has determined the character of Raggiolo over the centuries, making it a small cultural “island” in Casentino. Along with the cultivation of chestnuts and the making of carbon, sheep farming has been one of the main activities of the town for centuries and the long journeys with livestock in transhumance between the Pratomagno prairie in the summer and Maremma in the winter months, has stimulated traditions and rituals, cultural fusions and myths. The unchanged urban fabric of Raggiolo, shaped by the rhythm of ancient crafts, remains a precious testimony of the past, and defines the authentic charm of this old village. The Church of San Michele, built on the remains of the Palace of the Guidi Counts, houses important works of art.

The village of Raggiolo is a strategic starting point for some hiking trails: 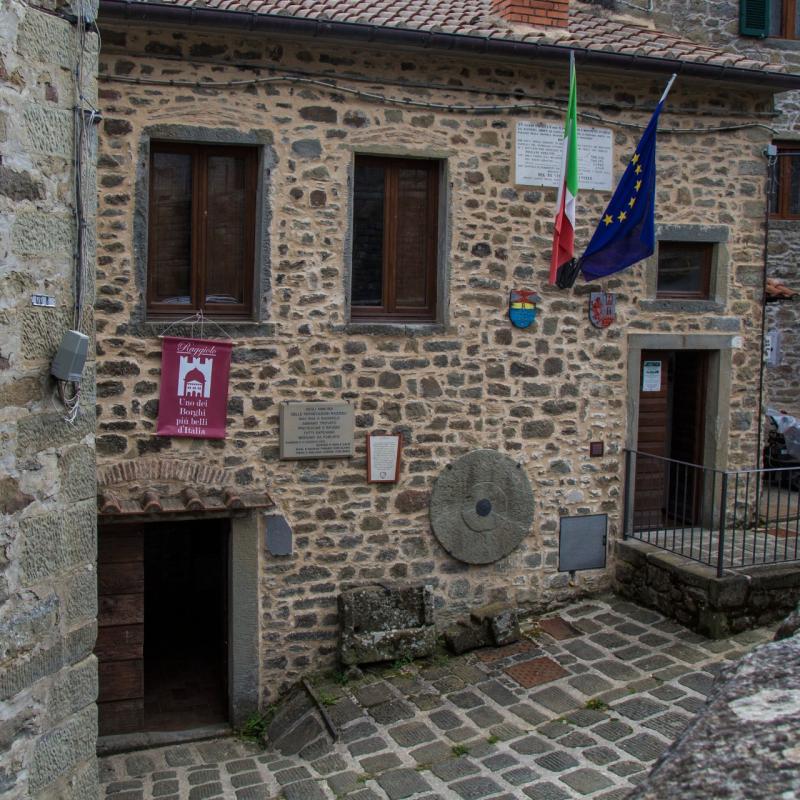 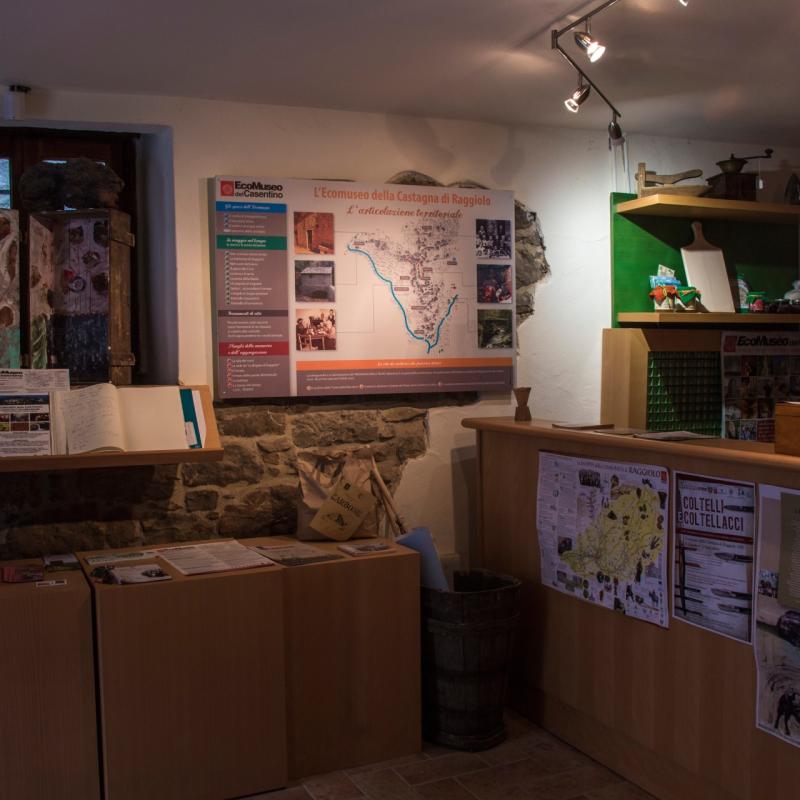 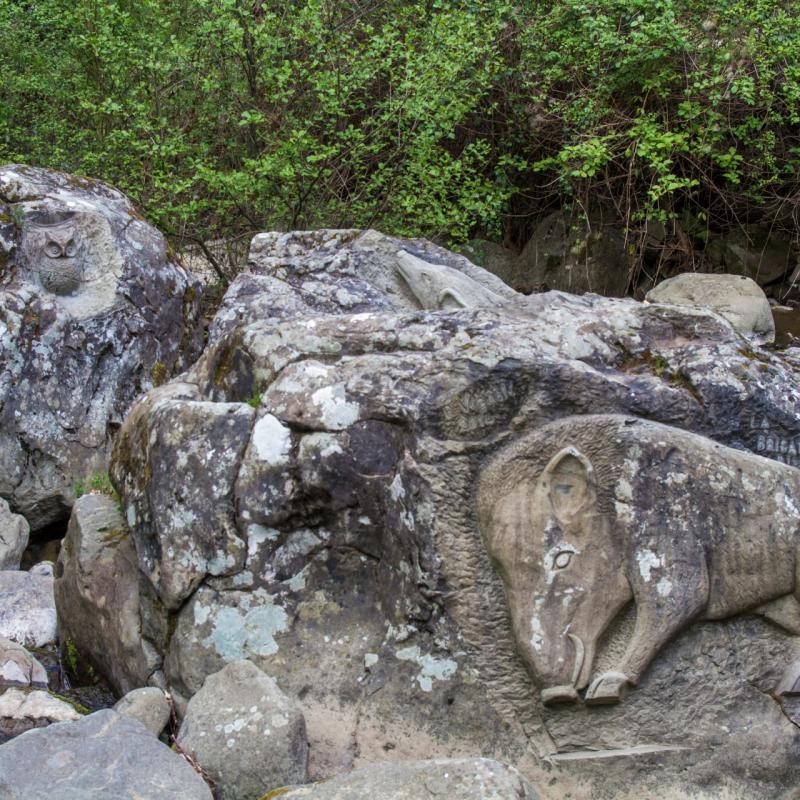 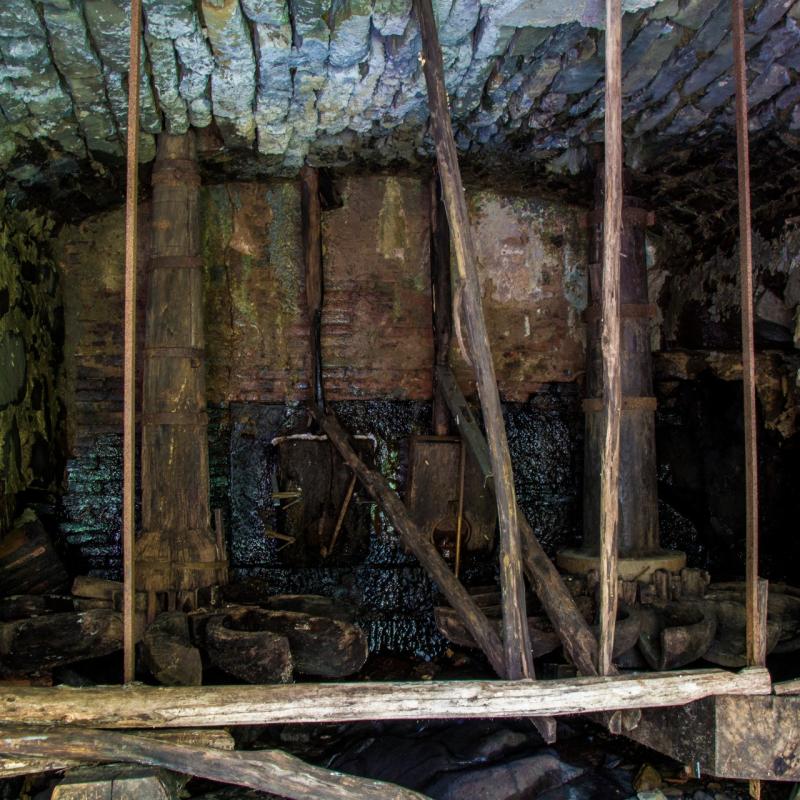 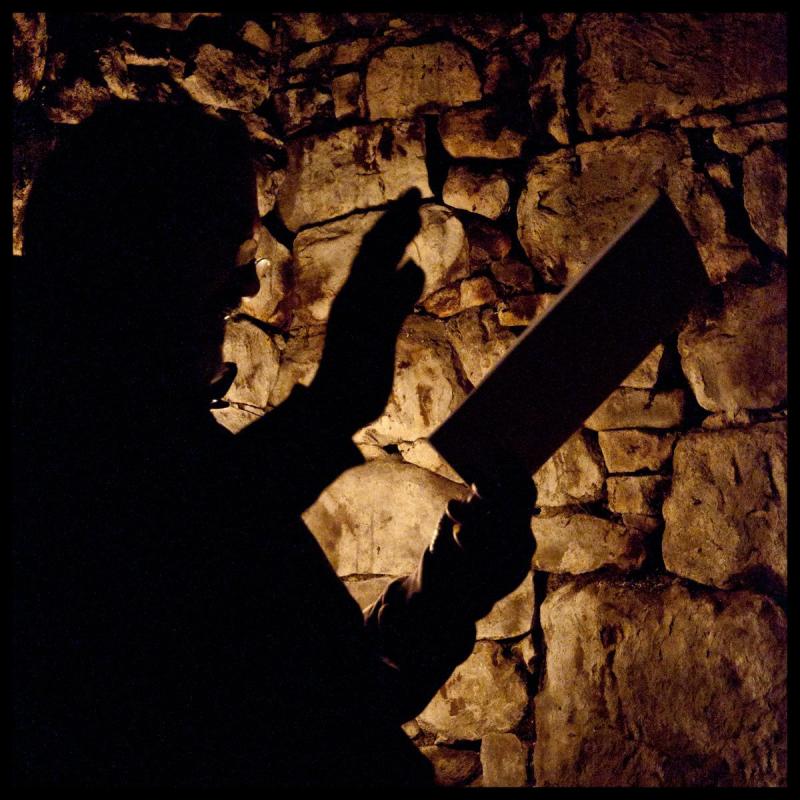 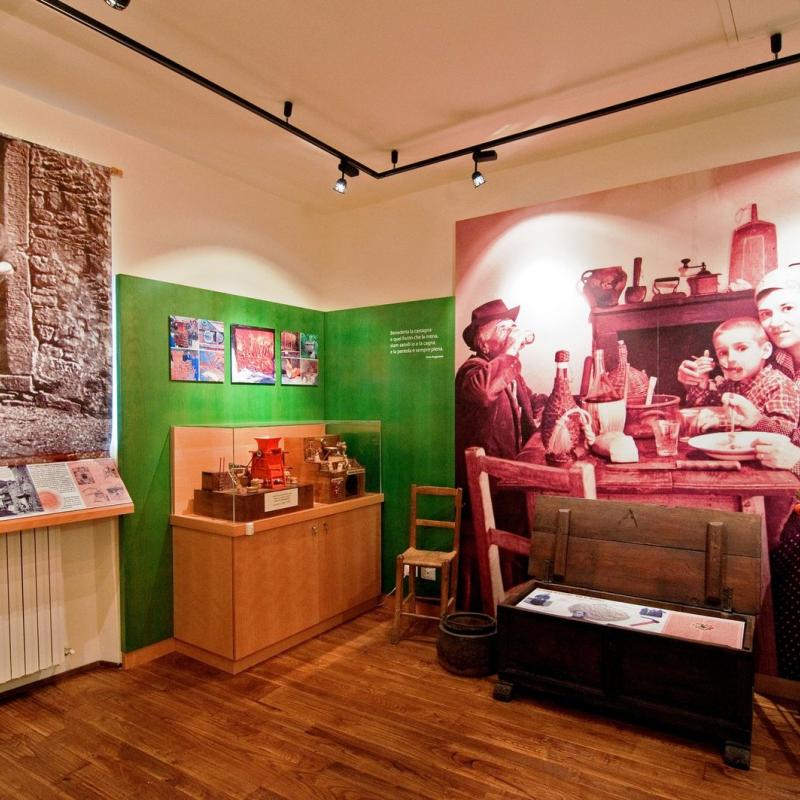 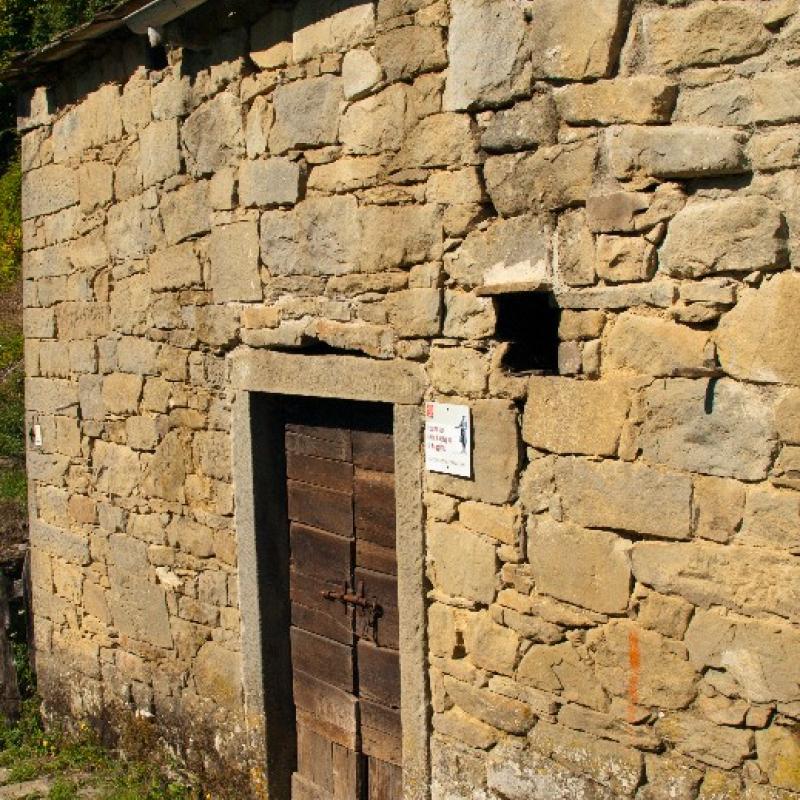 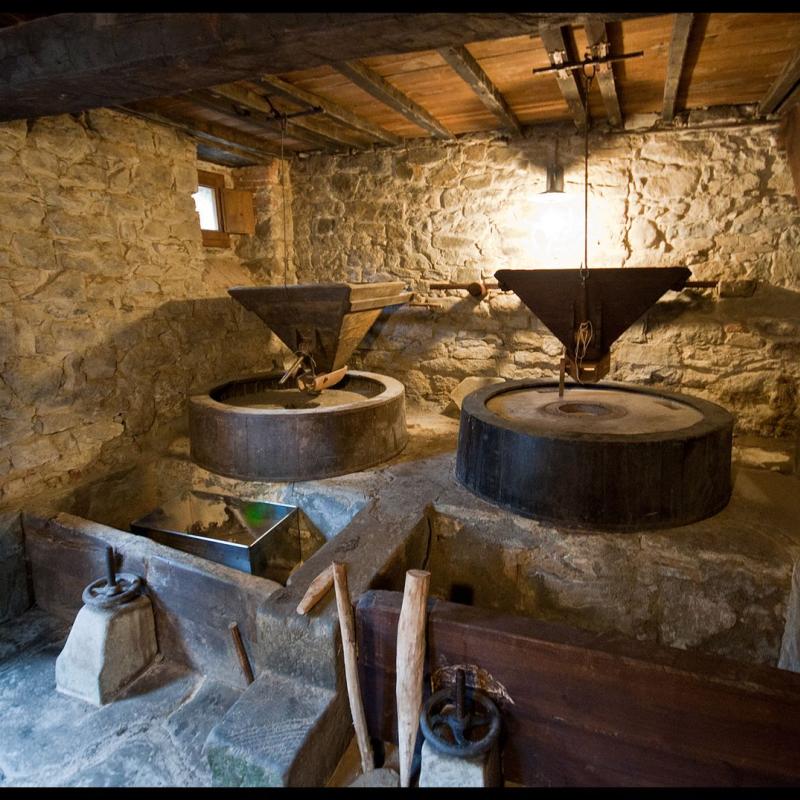