CASTLE OF THE GUIDI COUNTS OF POPPI EXHIBITION AND INFORMATION AREA

CASTLE OF THE GUIDI COUNTS OF POPPI.

EXHIBITION AND INFORMATION AREA OF THE CASENTINO ECOMUSEUM.

CASTLE OF THE GUIDI COUNTS OF POPPI EXHIBITION AND INFORMATION AREA

CASTLE OF THE GUIDI COUNTS OF POPPI.

EXHIBITION AND INFORMATION AREA OF THE CASENTINO ECOMUSEUM.

To visit one of the most representative buildings of Casentino, a visual and cultural reference for the whole Valley. To stroll along the halls and the ancient galleries, view the documents and precious incunabula of the Rilliana Library, learn about facts and characters from the Battle of Campaldino ...  use the exhibition space and get information on the entire network of Ecomuseums.

The Castle of the Guidi Counts of Poppi is the main cultural and touristic reference for the Casentino valley. The structure, open to visitors in its entirety, from the ancient prisons to the bell tower, dates back to the 10th century. The castle, surrounded by walls with Guelph-type battlements, is accessed through the Lion's Gate, built in 1477. In the evocative internal courtyard there is a large fifteenth-century stone staircase with an unusual and imposing column supporting the roof, in turn supported by overlapping stone brackets, wooden galleries with remnants of some exquisite original ceilings and numerous coats of arms embellishing the walls.
The court leads to the ancient prison. On the upper floors, the Salone delle Feste (Banquet Hall) is impressive, covered with a wooden truss structure and a decorated ceiling, where the last of the Counts Guidi, Francesco, signed the castle over to the Florentine Republic in 1440.
Finally, the Cappella dei Conti Guidi (Guidi Counts Chapel) is of extraordinary historical and artistic importance, with a series of fourteenth-century frescoes depicting “Gospel stories” attributed to Taddeo Gaddi, Giotto's most talented pupil.

Museum itinerary "Inferno a Campaldino" dedicated to the Battle of Campaldino

Housed on the piano nobile of the castle, the exhibition "Inferno a Campaldino" pays homage not only to the Battle of Campaldino fought in 1289 between Guelphs and Ghibellines, in which the young Dante Alighieri participated, but also to Florence and Arezzo in the mid-thirteenth century, to the Casentino area with its castles, and to war machines and warfare. The exhibition consists of informative panels and models of siege weapons. Noteworthy is the model with over 6400 lead soldiers perfectly arranged to reproduce the field as reported in historical data.

The library contains 25,000 volumes and brochures including over 700 incunabula (one of the largest Italian collections of printed examples from the 15th century) and a collection of 800 manuscripts from the 11th century, decorated with miniatures and ornate letters.

The Goretti Miniati Fund, property of the Stensen Institute, consists of 39 bound volumes of manuscript and numerous loose papers divided into 10 folders, in which the Jesuit father Giovanni Goretti Miniati (Florence, 1869 - Anagni, 1950) scrupulously collected information on Casentino, obtained from published bibliographies and  documents from both public and private archives, often unpublished and faithfully transcribed. Specifically, you can find detailed information on churches and sanctuaries, Casentino families, castles and feudal lords, eminent or illustrious people, Casentino bibliographies and various news. The Ecomuseum has contributed by creating an inventory of the volumes, which facilitates their consultation, and two monographs dedicated to churches and castles.

Information and Exhibition center of the Ecomuseum of Casentino

The ground floor houses the central information point of the Ecomuseums of Casentino: informative material and publications are available as well as a space for small temporary exhibitions.

At the top of the last flight of stairs in the Castle in Poppi,  visitors will come face to face with the caryatid depicting Count Guido by Simone da Battifolle. He was lord of the castle at the turn of the thirteenth and fourteenth centuries and was one of the most important Counts Guidi. While he was lord, the castle grew in size and importance. It seems that in 1310 it was Guido da Battifolle who hosted Dante Alighieri in his palace for almost a year.The castle of Poppi is also the scene of some of the most famous of "Le Novelle della Nonna (Grandmother’s short stories)”, fairy tales written in neo-Gothic style by Emma Perodi at the end of the nineteenth century and set in Casentino. Reading the short stories can be a pleasant prelude to visiting Casentino and the Castle of Poppi. A specific Parco Letterario (Literary theme park) was dedicated to this writer: https://www.parchiletterari.com/parchi/emma-perodi-e-le-foreste-casentinesi-068/index.php

Numerous events and exhibitions take place alternately throughout the year. It is advisable to view the Castle’s facebook page and the website of the Municipality of Poppi.

From the castle it is recommended to continue on a visit to the historic town center (Poppi is proud to be "One of the Most Beautiful Villages in Italy") with its porticoes and churches. There are also other castles in the valley worth visiting. Among these we recommend: The Castle of Romena, the Castle of Porciano, and the Palagio Fiorentino of Stia (reconstructed) with the "Dante Multimedia Center". 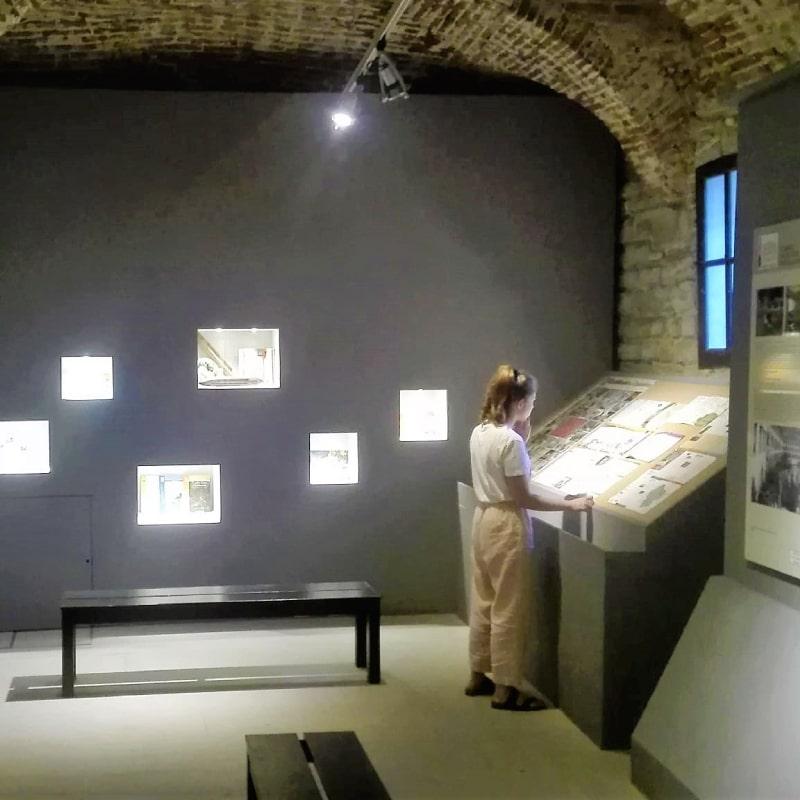 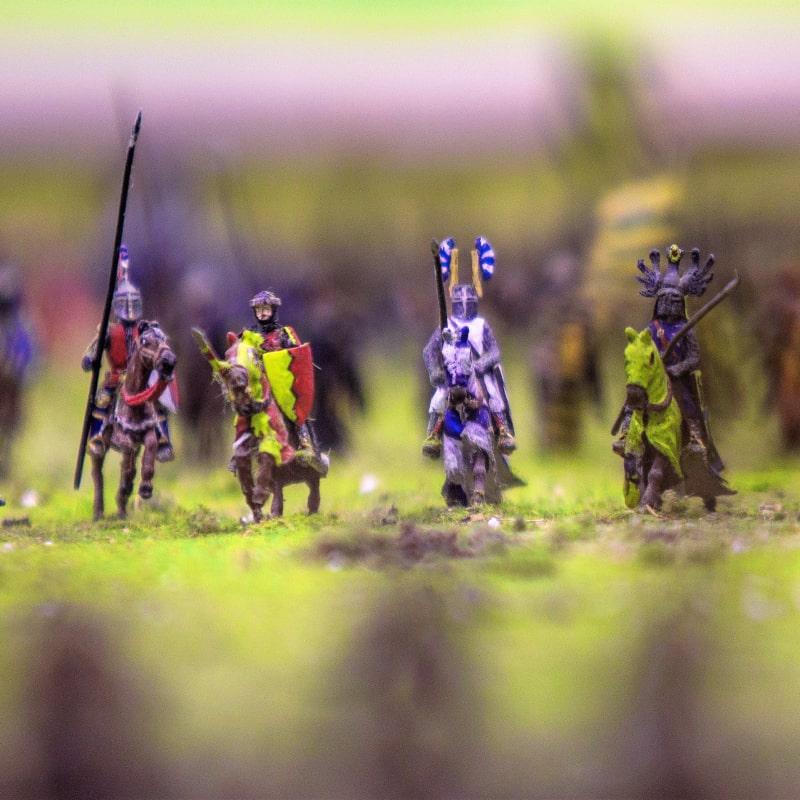 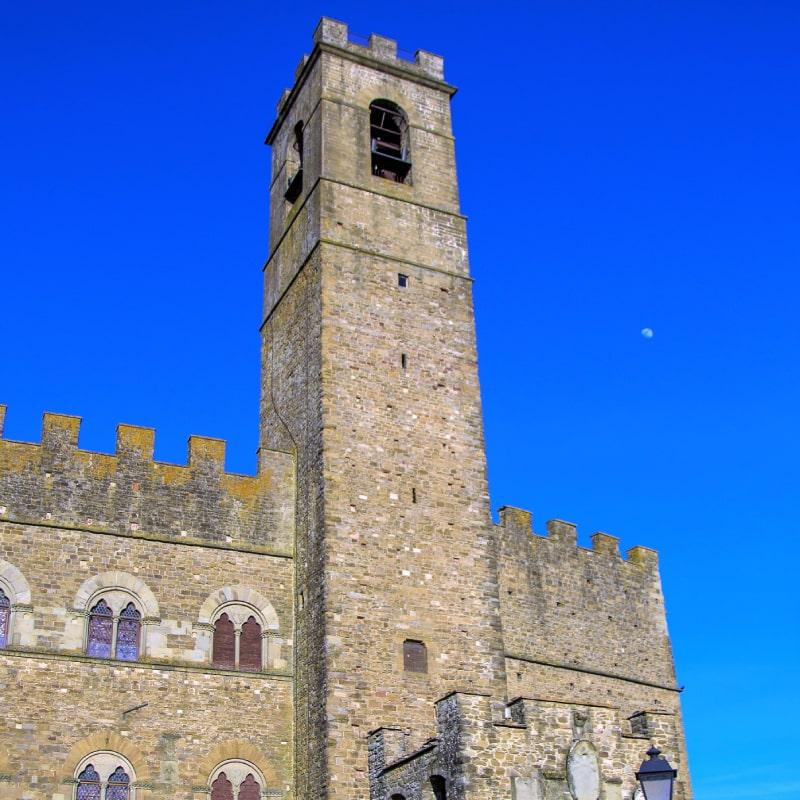 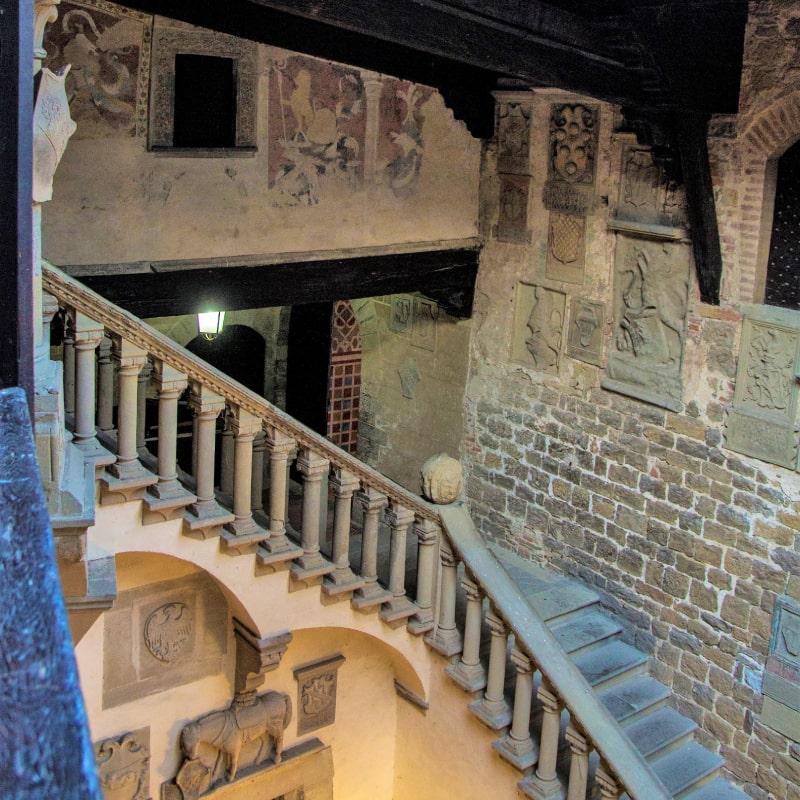 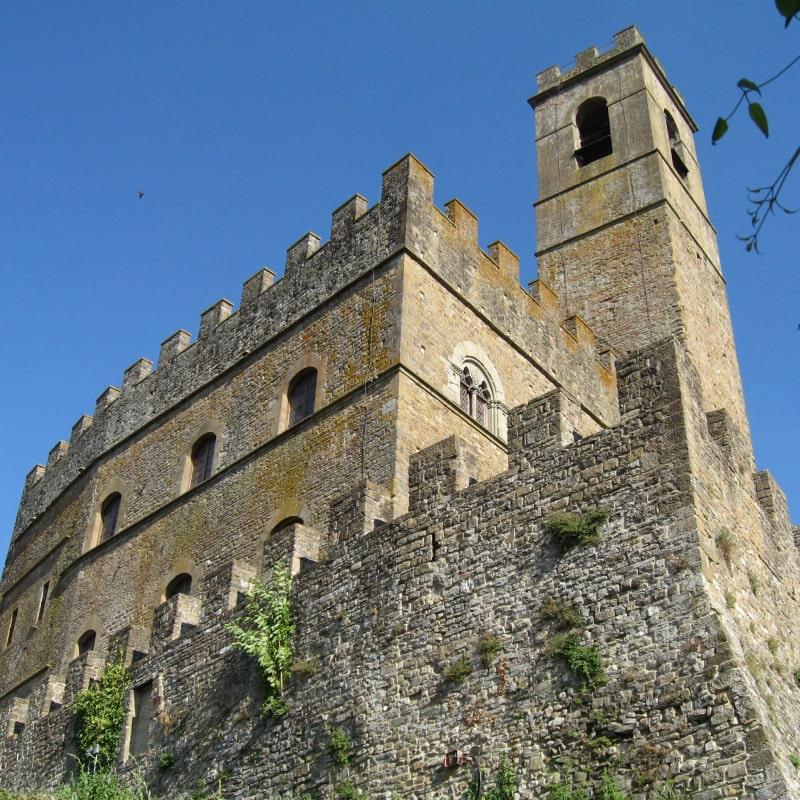 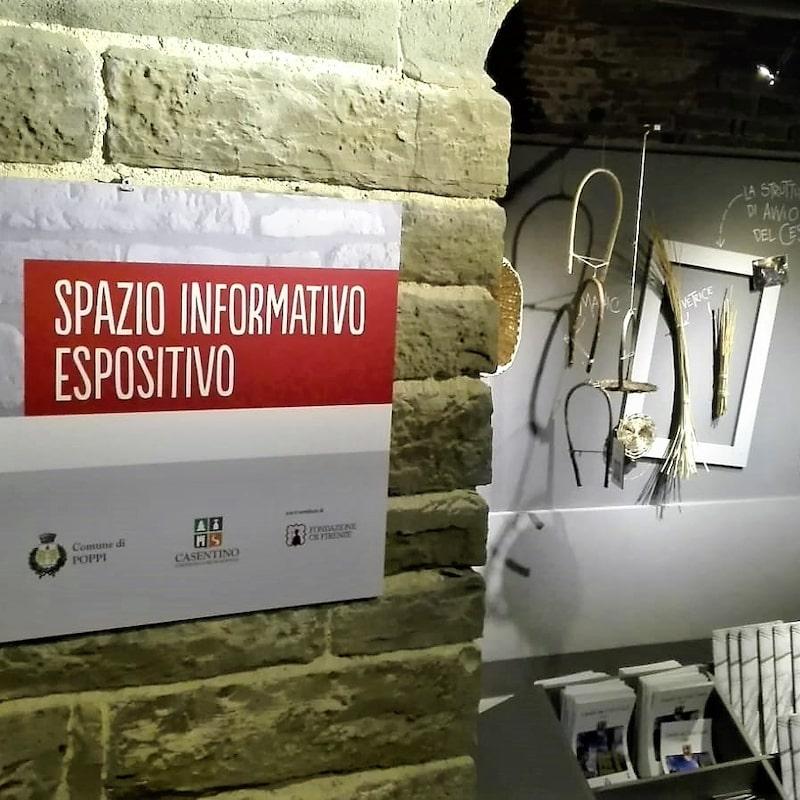 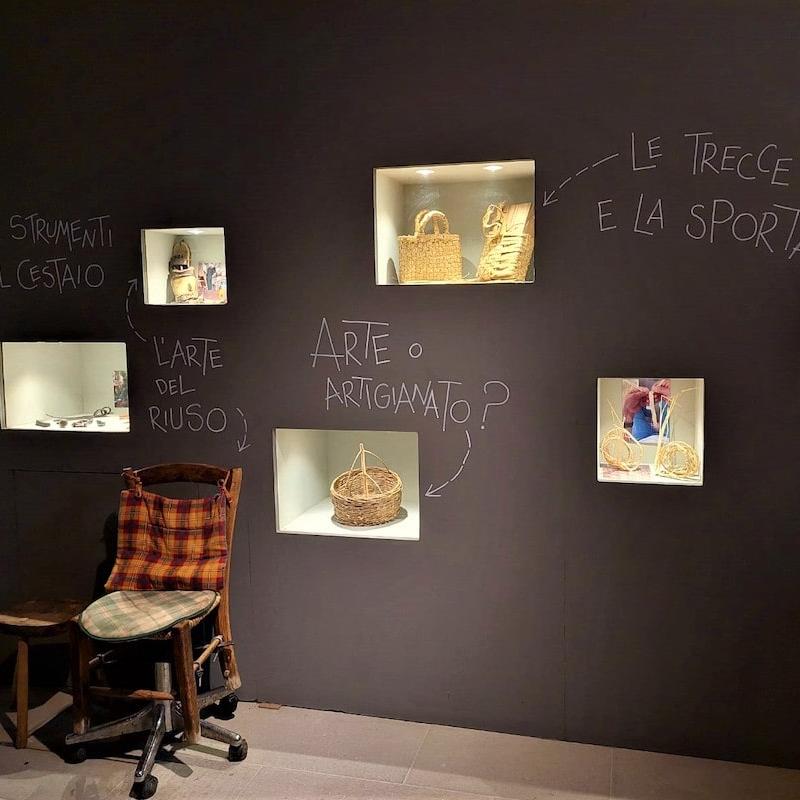 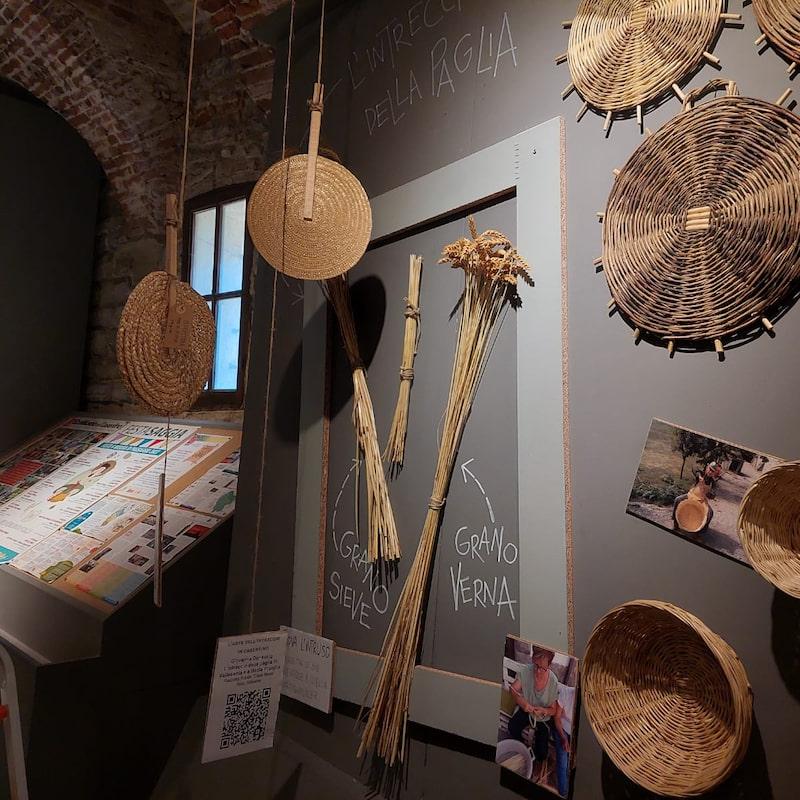 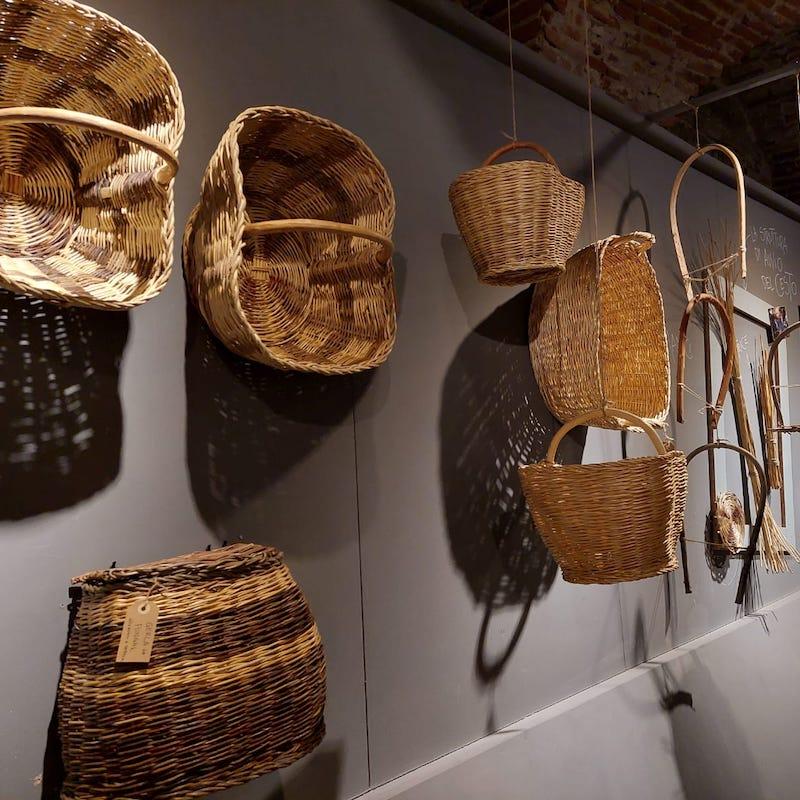